I honestly have no idea how people write entire books on parenting. How they can provide blanketed advance to so many parents when each child is inevitably unique? Before I had children, I, like many others, was a naïve know-it-all. And to top it off I was a “neglected” middle child who believed very firmly in fairness. I was absolutely positive that I was going to raise all of my children exactly the same way.

And then I had kids. A girl and then a boy. And now I know how absolutely impossible it is to raise two children exactly the same way. As far as I am concerned, parenting isn’t written in the pages of some book. It can’t be. It changes every day as you and your children grow. As you watch their personalities develop. As you learn to better understand each other. As you figure out what works and what doesn’t. I am constantly reminded of that. Especially since I (again) took a know-it-all stance after I had one child. (It typically takes a couple tries before I learn from my mistakes.) I was confident about having a second child, I had been through it once, I wasn’t a rookie anymore. I thought: I got this.

Then Wes arrived and it wasn’t easy. Yes, I had the advantage of knowing how to take care of baby, but this was the first time I had ever been a parent of more than one child and I had no idea that such a small change would alter my life so significantly. Over two years later we are slowly falling into a routine and it is easier now that they can entertain each other, but the key takeaway here is: two kids are exponentially more than one. One plus one somehow equals four.

As I have explained below, both require different parenting tactics, but there is one consistent tactic that we don’t use, we do not use distraction as a parenting method. I believe that children need to understand what actions are right and wrong so that they can eventually make those decisions on their own. If they are doing something wrong, we address it right then and there. We do our best to explain what they did wrong and make them apologize immediately if anyone was hurt.

So here are some of the tricks I have learned along the way. Will they work for anyone else? I have no idea. Is it a difference of raising boys versus girls? Again, no idea. This is all anecdotal. I am not an expert, but my kids are pretty cool…for the most part.

How to Parent Wes

Wes is my love bug, he loves to cuddle and hug and kiss and flirt with the ladies, but he also loves to hit. He is a two-year-old boy and all balls need to be thrown and all long thin sticks (light sabers, brooms, golf clubs) need to be used to hit other people and things. He is surprisingly fast and stubborn and pulls out the cutest lip pout you’ve ever seen as soon as he gets in trouble. I didn’t deal with any of this with Ev, so it has been trial and error, but here is what works for now:

Short, concise direction: Wes has selective hearing. He only hears the ends of the sentences. If you give him two options he always chooses the latter. And if I say: “Please do not use the broom to hit Evie in the head.” Wes repeats: “Hit Evie in the head?” To remedy this situation I either use short, caveman-like sentences like “No hit!” or I speak like Yoda “Hit Evie in head with broom, No!” This is much more effective and easier for him to understand.

Isolation: I tried taking things away. I cut his beloved binky in front of him and he laughed at me. I tried holding him in timeout for two minutes and he loved every minute of the one-on-one time. I eventually figured out that the only thing that makes my little love bug unhappy is isolation. This means his timeouts take place in his crib with no security items (these are the blankie, binkie and giraffe he carries at all times). He stays in there (pouty lip and all) for two minutes and occasionally yells “Hey you!” to try to get my attention. He knows he is in big trouble if he is in there. And when he is done, he readily apologizes.

How to Parent Ev

I’ve mentioned in past posts that Ev is an old soul. She is bright, thoughtful, emotional, observant, empathetic and oddly philosophical for a five-year-old. We share some similar qualities, which helps me better understand her, but her empathy and the ability to read people’s emotions are two characteristics that I am truly envious of. Figuring out how to parent her was like figuring out how to parent a 45-year-old woman who had five-year-old tantrums. We could take away all of her toys, but she still had her brain, which could keep her amused for days. She is a rule follower, so she doesn’t act up much, but when she does, this is what we use:

Mockery: Yes, mockery. I know, I am a horrible parent, but sometimes kids need to see how ridiculous they are being. She is extremely rational and the drama and tantrums are always over the most trivial matters and most likely because she is tired or hungry. So, I started mocking her. “My name is Evie and my life is sooo hard because I have to put my markers away before I can play with my Play-doh. Boohoo.” But it works. She starts laughing. I start laughing. She picks up her markers. It has been a great method.

And then she turned the tables on me. We had just had a horrible trip to Target. Ev asked a million questions while Wes tried to climb out of the cart. We barely made it to the car alive! I let out a heavy sigh and said “We still have to go to the grocery store. I don’t know if I can do this today.” Ev’s response: “My name is Emilie and my life is sooo hard. I have to go to Target and then to the grocery store.” At first, I felt fire fill my face. And then I realized she was right. This was ridiculous. I just had to go to the grocery store. I could do this. Do I reprimand her for parenting me or do I reward her for the inspiring words? After a brief internal battle, I stayed silent, but I gave her fruit snacks and got myself Starbucks and we survived the grocery store.

Honesty and transparency: Ev asks questions all day every day. Some are easy “Do you really like this song?”, some are more complicated “Why don’t people on the bottom of earth fall off?” and some are unanswerable “Who made God?”. For the most part we try to take the time to answer her questions. We want her to understand the why behind everything and understand cause and effect. Understanding that concept, makes punishment easier to digest and usually she can avoid it (or negotiate what she wants so she doesn’t have to break the rules to get it).

And when all else fails, we take away the iPad. 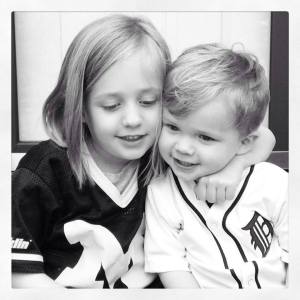 *One disclaimer (from a “neglected” middle child). You might find me talking more about Ev than Wes in this and other posts. This is not because she is my favorite. There are no favorites. They are too different and my relationship with each is too different. It is because I know Ev better. Her personality is better formed. Wes is still somewhat of a mystery and only just learning to express himself. I cannot wait to learn and understand more about him as well.