Yesterday when we were in the car on the way home from school Wes asked whose house we were going to—because it can get confusing with our current living situation-–and I quickly responded “your dad’s house.” And then I quickly regretted that answer.

When we initially decided to separate we were very careful about how we talked about the houses. We wanted both houses to feel like home to them. We didn’t want them think of it as my house or their dad’s house, but to think of both as their home. We used terms like old house and new house, but that got confusing because my house (the new house) was actually older than the “old house.” Eventually, despite our best efforts, we landed on Mom’s house and Dad’s house. Proper nouns.

Being the always-observant and quick-witted kindergartener she is, Ev picked up on the YOUR I had placed in front of Dad’s house and asked: “Why did you say that?”. Parenting trick #1, play dumb: “Say what?” She pushed, getting frustrated: “Why did you say YOUR dad’s house?”. Parenting trick #2, try humor: “Because he’s not MY dad. Ha…ha.” She ignored my failed attempt at humor: “That doesn’t even make sense. You’re my mom…”

Parenting trick #3, change the subject: “Want a snack?” After I dug up a couple random snacks that were stashed in my console and successfully distracted her, I stared at the red light and thought about Ev’s frustration and confusion. Your dad’s house sounds so much more impersonal than Dad’s house. Like I don’t know her dad. Like I hadn’t spent the last twelve years of my life by his side. Like he wasn’t the person who knew me better than anyone else during that time. She’s right. It is confusing and frustrating that I would refer to the person who had been my constant, my rock for so many years in such an impersonal way.

But the truth is I don’t know him anymore. In the five months we have been physically separated, a valley has formed between us. I guess the valley has been there for a while, more than a while, probably about five years. But now it’s deep and wide. We have grown up and grown apart. Communication has become less frequent and more difficult. The person who once knew my every move now knows little more than my social media followers about my daily life.

And in some ways that is sad, but for some reason it doesn’t feel so sad. It feels odd. Odd is the most accurate way to describe it. But that’s life. Life is odd. People drift in and out. Some make only brief appearances and some play critical roles. Some help us grow. Some help us better understand ourselves. And some carry us for so long that they have to let us go so that they can maintain the strength to carry on.

I know what you’re thinking. You’re reading this and thinking what the hell is wrong with this girl?!? Why isn’t she more sad? Or mad? Or heartbroken? This was her husband!! Did she ever love him at all?

I don’t blame you. I have felt all of those emotions, but most of them while we were still together. And I ask myself the same questions constantly. And while I don’t know the answers to most of them, I do know that I loved him. Very much so. That I had no doubts when I walked down that aisle. And I still have no regrets. Because we have two amazing children. Because I know that we were meant to spend that time together. 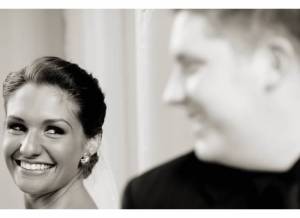 So all that I can say now is that it’s odd, extremely odd, that two people who loved and cared for each other for over a decade could so suddenly become strangers. And while I know that’s true and he knows that’s true and now everyone reading this and anyone who has experienced a similar relationship knows it’s true, the kids don’t need to know right now. Because our job is to make our children feel safe and comforted and loved. Because our job is to shield them, from the pain and harsh cruelty of the world around them as well as from our pain.